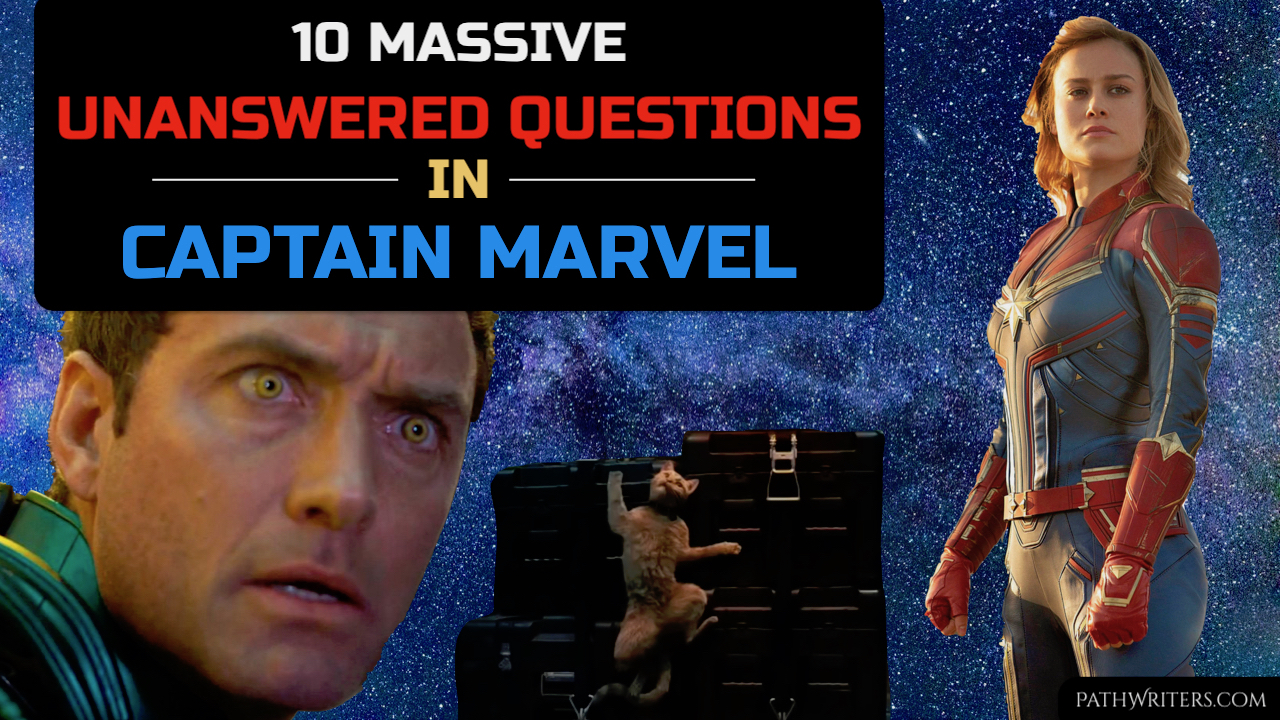 With Avengers: Endgame setting itself up to be one of the most anticipated and large-scale cinematic events in the last few decades, moviegoers are looking for any fix on the Marvel Cinematic Universe to hold them over. To satiate some of these cravings, Captain Marvel released this week, a little over one month before the fourth Avengers film. And while the events in Captain Marvel were long said to play an integral role in the Universe as a whole, do they?

We certainly learned a lot about the wider scope of the MCU, but were also left with just many unanswered questions.

10) Why are the Kree bombing an entire planet while they look for their operative?

The Captain Marvel film opens with Yon-Rogg’s Starforce being assigned to recover a Kree operative from the planet Torfa. They are explicitly told to not interfere or interact with the native life, who they suspect are also unknowingly hosting their enemies, the Skrulls. So, in their efforts to not engage or interfere with the native life in any way, the Kree send Ronan and the Accuser Corps to bomb the entire planet to oblivion.

Not only does this make no sense given the EXPLICIT non-interference stipulation of their mission, it is more likely to kill their operative and Starforce team in the process.

9) Why was the Tesseract let out of S.H.I.E.L.D.’s immediate custody long enough for Mar-Vell to get it aboard her ship?

At the end of Captain America: The First Avenger, we see the Tesseract being recovered from the bottom of the ocean by the efforts of Howard Stark and the SSR, which would eventually evolve into S.H.I.E.L.D. Move ahead 50 years, and Mar-Vell’s alter ego “Dr. Lawson” is conducting research at the Project P.E.G.A.S.U.S. facility on the Tesseract. This is obviously one of those items with which great care, precaution, and protection was given – considering an entire research facility was built for it.

So then how does Mar-Vell manage to sneak the Tesseract out of the research facility and off to her orbiting lab/spaceship? Surely someone would’ve noticed if an artifact that important suddenly went missing?

8) Why do either the Kree or Skrulls care about Mar-Vell’s “light-speed engine” when they both have faster-than-light travel?

Beginning in Guardians of the Galaxy, we see that interstellar and, quite possibly, intergalactic travel, are commonplace to get space-faring species (including the Kree) from one part of the Universe to the other. While these ship-bound methods may not have the magical elegance of, say, the Bifrost or the Space Stone, they are indeed functional and prevalent.

So then why do the Kree or Skrulls possibly care about any kind of “light-speed engine”, which is infinitely slower than existing modes of space travel? Moreover, why would Mar-Vell bother researching such a technology when dealing with the Tesseract at all?

7) Why does the explosion of the engine made with the Tesseract only give Carol powers?

The means by which Carol gains not only powers, but, to borrow from Disney’s repertoire, “phenomenal, cosmic power”, is very much hand-waved in this origin story. We’ve seen Infinity Stones give Humans powers before in the experiments conducted by Strucker. These resulted in the successes of Pietro and Wanda, along with many apparent failures beforehand. However, these experiments were done with the Scepter, the object directly housing the Mind Stone.

In Carol’s case, she has no direct contact with either the Space Stone or its container, the Tesseract, like Wanda did with the Mind Stone.

Additionally, Carol wasn’t the only one in the proximity of the explosion. Both Mar-Vell and Yon-Rogg were caught in the energy’s blast wave. So, what makes Carol special? Perhaps Mar-Vell had already died by that point, but Yon-Rogg was still well and kicking.

6) What was Yon-Rogg’s long-term goal when he captured Carol?

So Yon-Rogg is sent to Earth to find Mar-Vell and seize her (arguably useless) research and its source. When this failed, he returned to Hala with Carol – to what end? They don’t try to learn the secrets of what’s powering her or extract some knowledge from what happened to her via Mar-Vell’s research.

Instead, they brainwash her, dampen her powers, and assign her to a strike force for 6 years.

Was there any long-term goal at all? If there was, neither the Supreme Intelligence nor Yon-Rogg seemed to let on what it might be. Additionally, there was that extremely weird exchange with Yon-Rogg about “My blood flows through you…”

What was the point of capturing Carol and subsequently inhibiting her powers? What was Yon-Rogg’s long-term plan for her and what was the deal with “his blood” being transfused into her?

5) Why did no one at Project P.E.G.A.S.U.S. recognize Carol when she worked there for years?

It’s made clear in the movie that the crash incident was covered up. But what wasn’t covered up was the fact that both Carol and Maria worked as test pilots for Mar-Vell for a notable period of time and were based at the Project P.E.G.A.S.U.S. facility.

And yet, we’re supposed to believe that not one person at Project P.E.G.A.S.U.S. would recognize Carol? Sure it’s been 6 years and she’s supposed to be dead, but still…

4) What was the deal with Goose?

Goose is a highlight of the film, but his origin and nature are left far too ambiguous. Presumably, he was brought to Project P.E.G.A.S.U.S. by Mar-Vell, but we aren’t specifically told this.

But, why would she do that? Both Kree and Skrull considered flergens extremely dangerous. Considering she’s housing refugees on her hidden space lab and trying to keep a low-key human identity at Project P.E.G.A.S.U.S., having a pet that eats larger lifeforms is a very bad idea.

3) What was the deal with Goose scratching Fury?

Goose and Fury hit it off right away and this continued throughout the film. Goose is even hinted several times at having sparks of higher intelligence (sneaking onto the Quadjet, leading the group to the Tesseract, not attacking the Skrulls disguised as Kree). So when he arbitrarily scratches Fury’s eye, it really doesn’t make much sense given he’s been all about Fury up until that point, and after.

2) If Fury and S.H.I.E.L.D. experienced these events firsthand, why does Fury refer to Thor as the first visitor from another planet?

In The Avengers, Fury is explaining the events of Thor to the group of heroes and states, “Last year, Earth had a visitor from another planet . . . We LEARNED that not only are we not alone, but we are hopelessly, hilariously outgunned.”

While these heroes may not have known about aliens and the potential of hostile invasion prior to this, Fury and S.H.I.E.L.D. surely did after the events of Captain Marvel (and likely before, given some expanded canon like Agents of S.H.I.E.L.D.). Considering Fury was briefing the people he himself had determined as the best suited to combat Loki’s forthcoming invasion, there was no reason to withhold such facts from them, much less outright lie to them like he did.

1) Why was Loki’s invasion not enough for Fury to page Carol?

At the end of Captain Marvel, Carol goes off into space to help the Skrull refugees find a new home and end their war with the Kree. Before doing so, she gives Fury the now-iconic pager and tells him “For emergencies only.” 20 years pass and it’s all fine. Then Loki shows up and follows through on his promise for a full-on invasion.

Why was this event not enough for him to call Carol?

Sure, he had his Avengers somewhat assembled at that point. But, with a looming full-on and world-threatening invasion that even he admitted the Avengers were ill-equipped to fight, Fury should’ve been prompted to call in all his big guns. This is especially relevant considering every event in The Avengers hinged on the Tesseract, an object with which Carol has an undeniable connection.

Although Coulson didn’t personally encounter any Kree, he was aware of them. Should he have recognized them in the Agents of S.H.I.E.L.D episode“T.A.H.I.T.I.”?

The Kree have arguably played a much larger role in Agents of S.H.I.E.L.D than the movies. They’ve been the antagonists of Season 5, the source of the Inhumans, and even occasionally shown up in passing visits and mentions (thanks Sif!). Now that we have delved further into the past of Coulson and S.H.I.E.L.D., we know that the spy organization has had a long-established knowledge of the predominantly blue species.

However, in the Agents of S.H.I.E.L.D episode “T.A.H.I.T.I.”, Coulson ends up in the Guest House facility, which was used to research the Kree corpse recovered from HYDRA and designated “Guest Host”. Fluid extracted from this Kree were used to synthesize a resurrection juice (GH.325) that Fury ordered to be used on Coulson, reviving him after Loki stabbed Coulson through the chest.

When Coulson encountered the Guest Host, he spent the rest of the season dumbfounded as to what this blue being could’ve been. In the season 1 episode “Yes Men”, Coulson event presented the question to the Asgardian Lady Sif when she arrived on Earth, resulting in this exchange:

Coulson: You’ve… visited other realms, seen different species, aliens. Have you ever encountered any that were… blue?

Sif: Uh, Interdites, Levians, Pheragots, Kree, Sarks, Centaurians. The Frost Giants tried to conquer your Earth a millennia ago, but Asgard drove them away.

Coulson: Oh. Well, thanks for that. And the others … have any of them been here recently?

Sif: [sighs] Rest easy, Phillip, Son of Coul. None of the others have ever visited Earth.

After hearing this, Coulson still shows no reaction to the mention of “Kree”. Not only is it now canon that Kree recently visited Earth, Coulson knows directly about the event, their biology and vaguely their intentions. But he still doesn’t put the puzzle together that Guest Host is a Kree until much, much later.

What questions did the movie answer or raise for you? Did I miss the hidden explanation? Leave a comment and let me know!